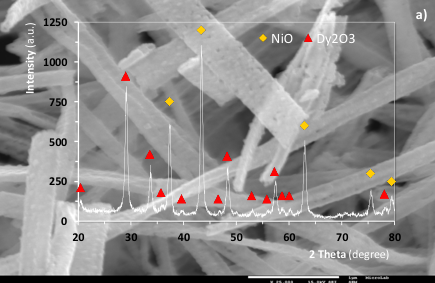 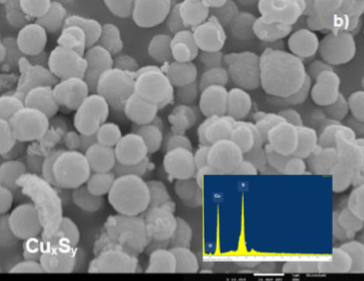 We continued our work on the preparation by electrospinning and characterization of nanoparticles and nanofibers of intermetallic compounds and bimetallic oxides containing f-block elements (lanthanides, Th and U), copper or nickel. The preparation and characterization of thermoelectric materials such as metal borides, pnictides and chalcogenides was also undertaken. Electrospinning is a reproducible and low cost route that enables the production of nanostructured materials, which expected high surface areas and tunable surface properties bring benefits to their properties. Applications of these compounds were studied: i) studies in heterogeneous phase catalysis for the production of value added products, such as methane, using primary pollutants, such as CO2 as feedstock, Figure a, and ii) for the generation and storage of energy, application as thermoelectric materials (CuxSy) and hydrogen absorbers (important for the development of fuel cells), Figure b.