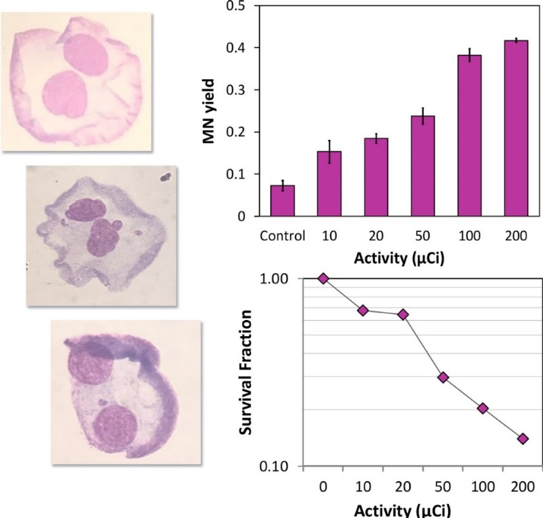 In collaboration with the RS Group, we have been involved in the radiobiological evaluation of Auger-emitting (99mTc) or β− emitting (64Cu) radiocompounds, promising candidates for selective and targeted radiotherapy due to the very short range (micrometers to few nanometers) of the emitted β−particles and Auger electrons. Continuing our previous work on the ability of 99mTc-labelled AO-derivatives to cause DNA damage, focusing on late biological effects, an increase on the number of micronuclei (indicative of genetic lesions) induced by 99mTc-containing compounds was observed. In addition, exposure to 99mTc led to the decrease of the cellular survival fraction, indicating the occurrence of a persistent lesion, dependent on the activity of the compound. Studies using the mixed β−/Auger emitter 64Cu have also been initiated and have highlighted the ability of this radionuclide to induce both early and late DNA damage in tumoral cells.