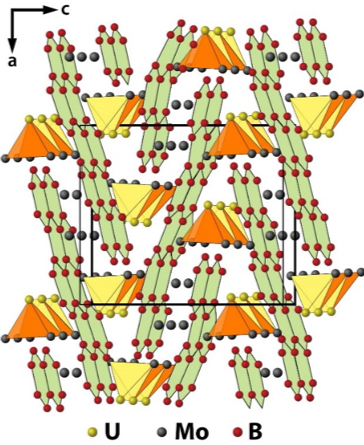 The study of magnetism and strongly correlated electron behaviour in intermetallic systems containing f-elements has been a continuing topic of research in the Solid State group. In this context, a novel ternary compound, UMo3B7, has been synthesized and characterized. It crystallizes in the YMo3B7-type structure, which exhibits a well-developed two-dimensional boron network and is composed of boron filled trigonal prisms as well as unfilled tetrahedra and tetragonal pyramids formed by metal atoms. Specific heat, magnetic susceptibility and electrical resistivity studies point to the inexistence of long-range magnetic order above 500 mK in UMo3B7. Rather, a spin fluctuation scenario characterizes the low temperature behavior of resistivity, magnetic susceptibility and specific heat of this compound, resulting in a moderately enlarged Sommerfeld value of g = 28 mJ/(molK2).